Despite not being the capital of Morocco, Marrakech is one of the most important cities in the country. It has more than a million and a half inhabitants and was founded in 1602 by the Almoravids (monks-soldiers who belonged to nomadic groups from the Sahara). In addition, Marrakech, Fez, Meknes, and Rabat are the imperial cities of Morocco.

Marrakech has several World Heritage Sites, including the Medina. This is the old city, which is surrounded by bastions (military fortifications), and inside you will find monuments, palaces, squares, and important markets, as well as small streets in a kind of labyrinth.

Without further ado, here is an itinerary of what you can see in Marrakech in two days. 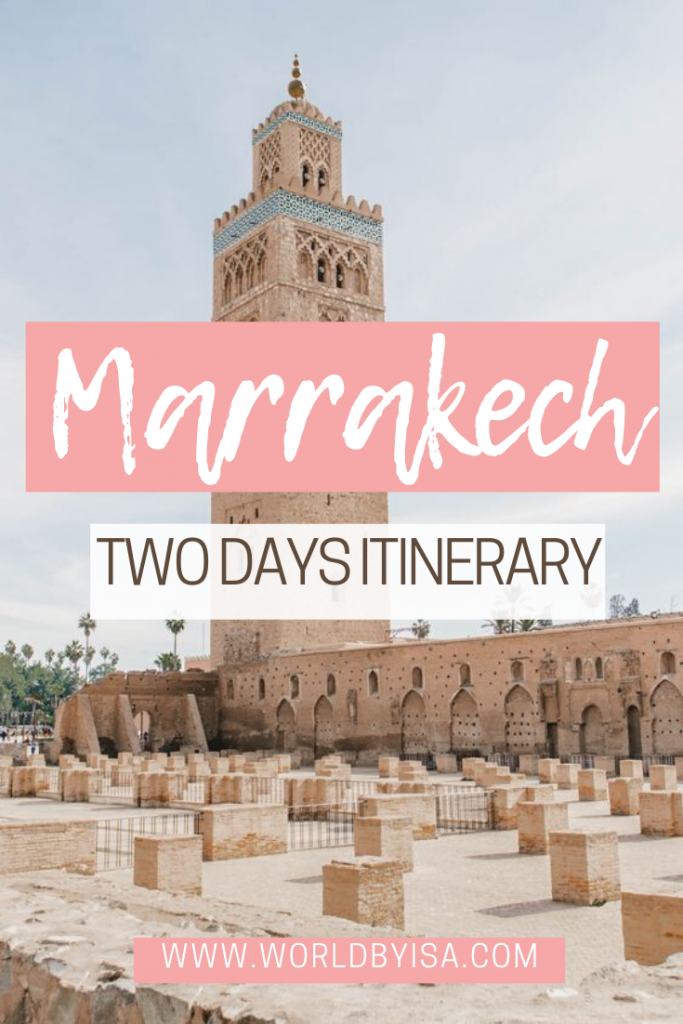 How to Spend 2 days in Marrakech

Koutubia Mosque is the most important mosque in Marrakech. You will find it at the end of Jemaa el Fna square from where you can see its impressive 69 meter minaret. Unfortunately, you’ll have to be satisfied with seeing it from the outside, since like all mosques, only Muslims can access it.

Before the construction of the Koutubian mosque, there were two other mosques on the same site built by the Almohad conquerors. In fact, on one side of it lies the remains of one of the previous mosques. 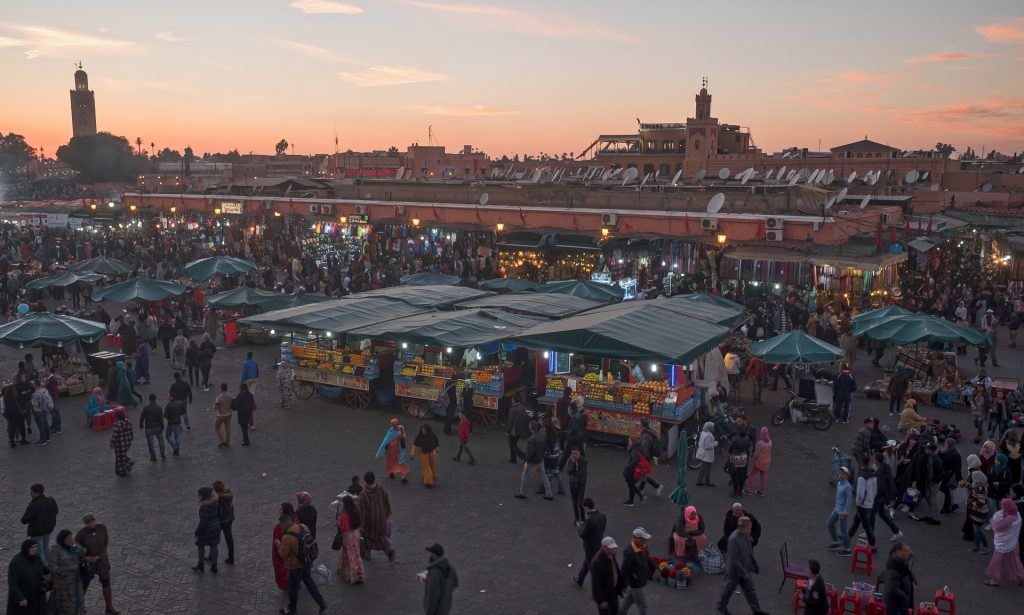 This is the heart of the city and where all the action takes place. As the day begins, little by little it fills up with some stalls selling natural juices/supplies, ladies who make henna tattoos for you, musicians, jugglers, and others who display animals such as monkeys and snakes.

You can walk around the square at different times of the day and you will always find something new that catches your eye. Regardless fo the time of day, you will be able to watch the people passing by, perceive the smells of spices, nuts, and other Moroccan products, and have a good time.

The souks – or markets – are in the northern part of the Jemaa el Fna square. There are several streets, some larger and busier than others, divided into sections. There are sections of dresses, spices, leather bags or cushions, carpets, wool, crockery, among other crafts made of different materials.

It is a huge place, where there are so many little streets that it is easy to get carried away and get lost. The good thing is that the vendors are used to this and they even give you directions on how to get out, without you even having to ask.

The old palace where the war minister Si Said Ben Moussa lived in the 19th century, now houses a collection of art and crafts. For example, copper pieces, carpets, Berber clothes and jewelry, wood-carved figures, among other objects from Marrakech or the surrounding area.
Admission costs 20 dirhams (1.80 euros) and they are open every day from 9 am to 12 pm and from 3 pm to 6 pm.

Close to where the Jewish quarter used to be, there is this 8-hectare palace. Its interiors, with more than 150 rooms, are full of mosaics and carved cedar wood details. Around the palace, there are large gardens to enjoy.

It should be noted that it was the residence of a vizier of the royal court, who was the political advisor of the sultan in the late nineteenth century. It even has a harem where the 24 rooms of the vizier’s concubines used to be.

After the Jews left Morocco after World War II, the Jewish quarter next to this square and the shops there were abandoned. Today it is a modern square, with bars and restaurants above the shops, banks, palm trees and a good place to buy souvenirs at a good price.

They also sell lamps, mirrors, beds and other objects to decorate the house. 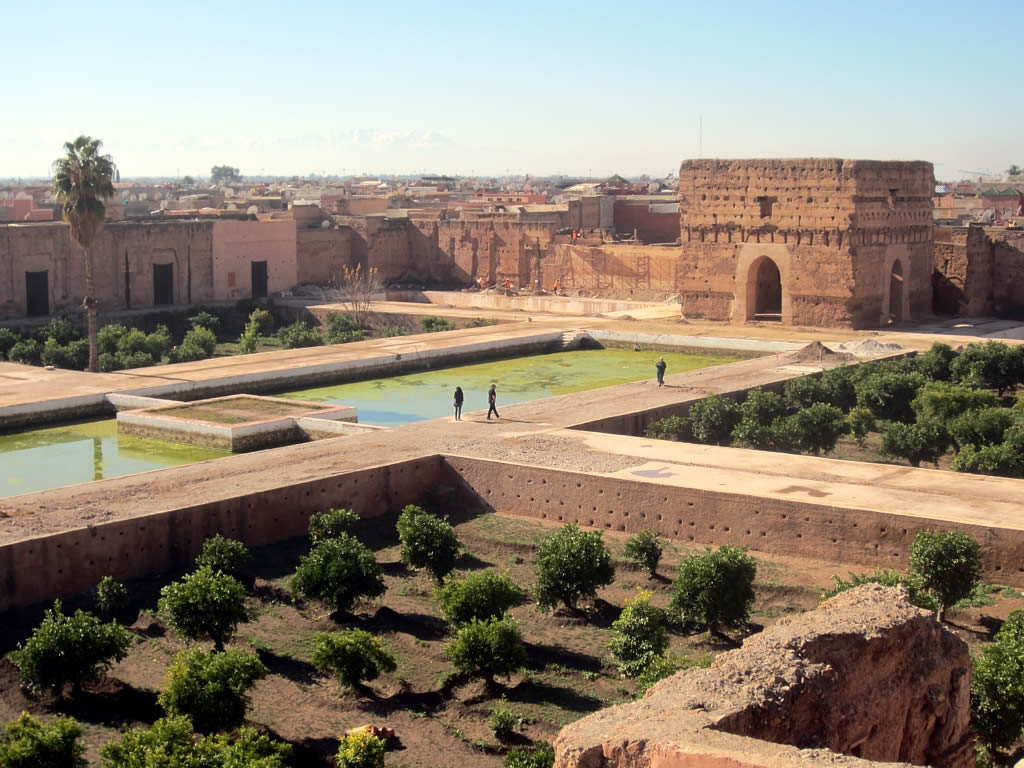 Where today you see orange gardens and high walls, there used to be a magnificent palace with 360 rooms luxuriously decorated and built with the most expensive materials.

This palace was built as a celebration of the victory of Sultan Saadí Ahmed al Mansur over the Portuguese army at the Battle of the Three Kings in 1578. At that time, it was the wonder of the Muslim world and was influenced by the Alhambra in Granada. Now you can enter for 20 dirhams from 9 am to 4:30 pm.

For many centuries these tombs remained secret. Only the Moroccans knew about them, until in 1917 after much research, one of the French officers discovered them. These are the sacred tombs of the sultans, next to the Kasbah Mosque and the Royal Palace. Now they are one of the most visited places in the city, although the way to reach them is still as hidden and winding as before.

This is the door to the fortified area of the Medina, near the Royal Palace. It is one of the most beautiful and photographed gates of the city, among the 19 gates in total. It was built in the 12th century with a stone instead of bricks like the others. 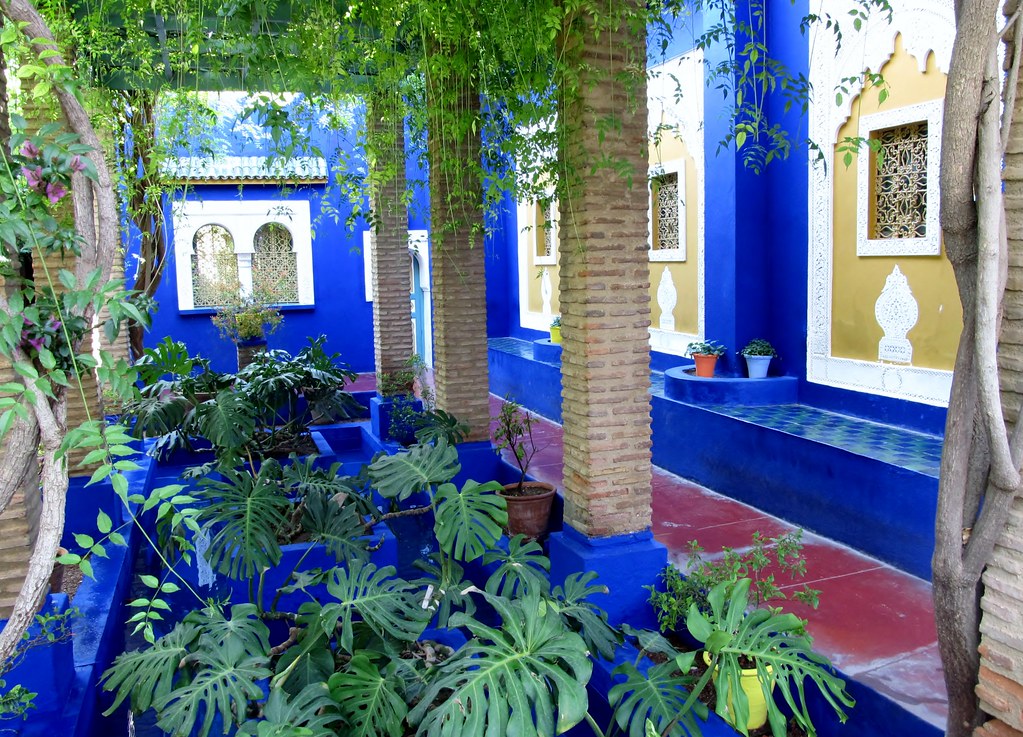 It’s the botanical garden of Marrakech and has plant species from all continents and 15 species of birds from North Africa. It was designed by a Frenchman exiled in this country at the time when it was administered by France. Later they built a villa next to the garden and it was opened to the public.

The walls of the house are an intense cobalt blue color, also known as “blu Majorelle”. There are also streams and ponds with water lilies.

Entrance to the gardens for those over 12 years old costs 70 dirhams (6 euros). If you want to stay at the Museum of Islamic Art, it costs 30 dirhams (2.70 euro) and the opening hours are from 8 am to 6 pm, although from October to April they close half an hour earlier. 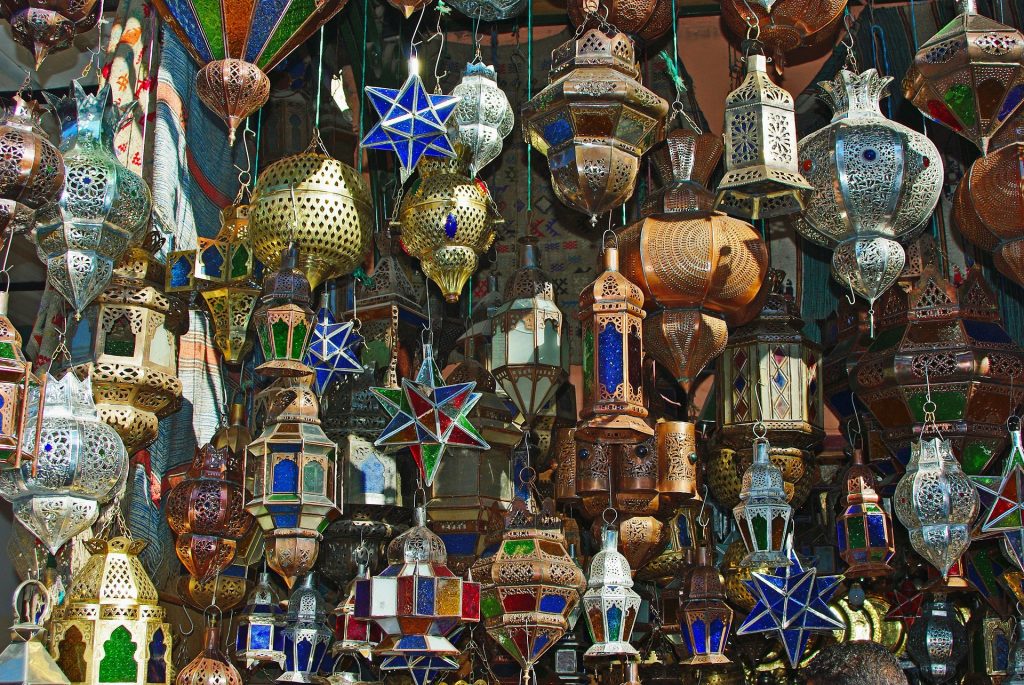 On one of the main avenues, Avenue Mohammed VI, you will find the Ensemble artisanal. If you want to escape from the hustle and bustle and hard bargaining, they sell good quality handcrafted products here.

It doesn’t matter if you want paintings, jewelry, wood objects, ceramics, dresses, carpets, tiles or any other native product, here you will be able to choose them calmly and even have a drink at the local bar.

Very close to the handicraft center and on the same avenue, is this park that revolves around technology. At the entrance, there is a Telecommunications Museum with old televisions, telephones and more.

There is also WiFi throughout the park, an amphitheater, and of course, plenty of space to walk, sit and relax inside the park. The entrance is completely free. 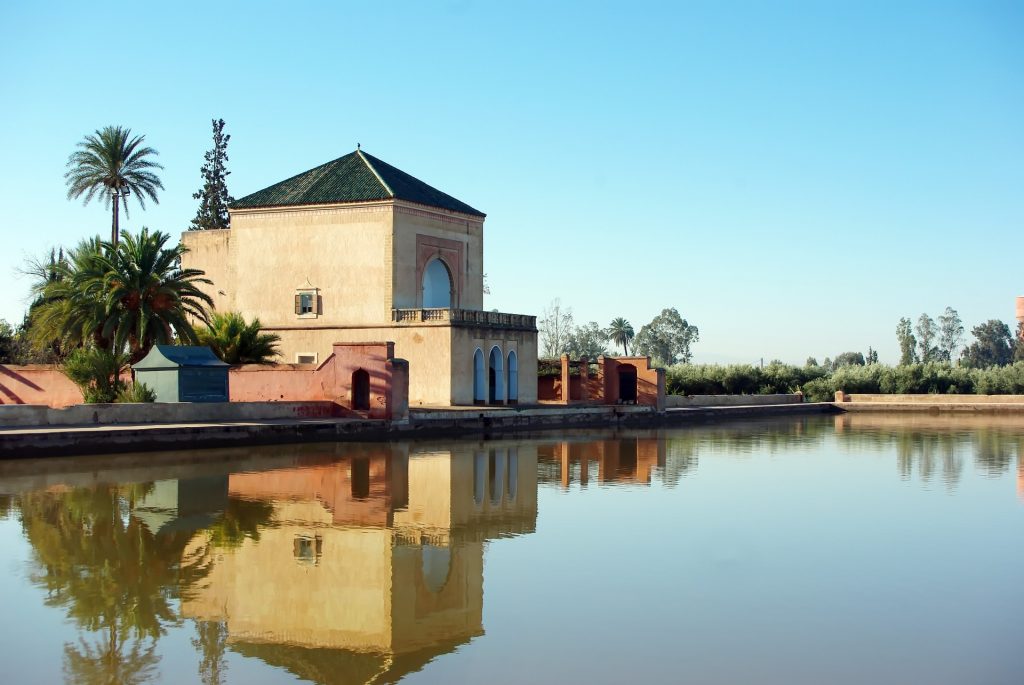 Near the airport are the most famous gardens in Marrakech. The olive groves and orchards are watered by a large pond – home to carp – which serves as an irrigation system with underground channels. The water is brought from the mountains 30 km away. The good thing is that entrance is free, and you can go by taxi. They are open every day from 8 am to 5 pm.

And with this, basically, you would already visit all the important points of the city. However, although it is great to know the tourist sites for their history, their architecture or simply to appreciate their beauty, it is just as important to get lost in the city a little.

There is nothing like walking around less touristy places to discover the real essence and take away special memories.

Written By
Isadora
More from Isadora
Pin15CompartilharTwittarCompartilharCompartilhar15 Compart.The year before has made people stay at home more often...
Read More