Top 5 Awesome Things to Do in Yerevan and Tbilisi 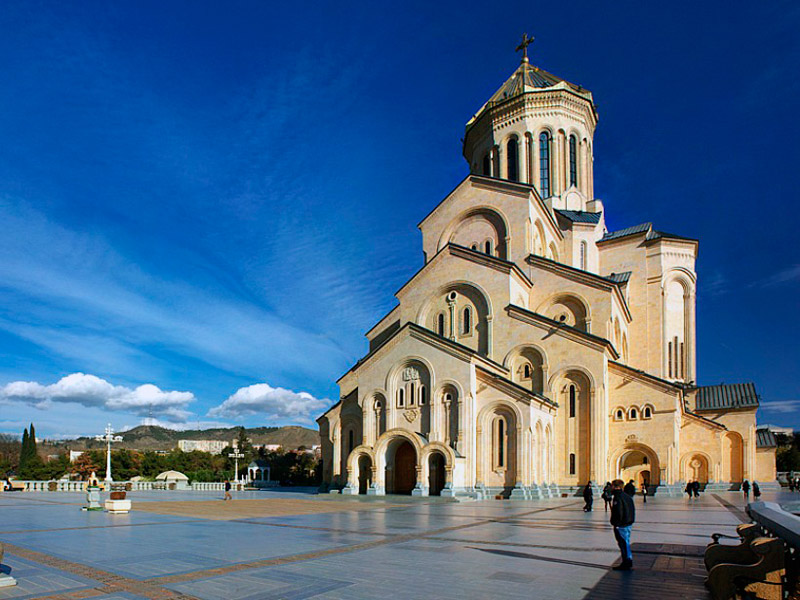 Today we’d like to tell you about two amazing hospitable countries of the South Caucasus region  Armenia and Georgia. They have so many similar features and at the same time are so unique. The tourists often prefer to combine their journey and to visit these countries during one tour.

Thus they can get a deep, idea of the Caucasian customs and traditions and fully experience the temperament of the locals. In this article, you will learn some awesome things to do in Armenia and Georgia, namely their capital – Yerevan, and Tbilisi.

Top 5 Awesome Things to Do in Yerevan and Tbilisi Get acquainted with the national cuisine

It is said that the soul and heart of each country’s culture lie in its national cuisine. Georgians have rich traditions of national cuisine. You can easily get acquainted with the Georgian national dishes in numerous restaurants and cafes. Here even the street food is delicious and exquisite.

Among the must-try dishes are the famous khachapuri (so-called tortilla cooked with cheese); khinkali (spicy meat in the thin dough); different kinds of barbecue with spices; and of course, the most famous Georgian sweet called churchkhela which resembles a sausage made of various nuts and grape juice.

We will not go into details about the Georgian wine: it is already world-famous, all you need is just to try the wine made of ripe grapes with great love!

In Armenia be prepared to gain a couple of kilos! The Armenian national cuisine is considered one of the most delicious and exquisite with thousands of years old rich traditions. It has different features that were once influenced by historical, geographical, climatic and even historical-political factors.

As a result nowadays the country has a unique set of dishes that are peculiar to only Armenians. In general, the local national food is quite spicy and seasoned with pepper, garlic, cumin, and greens.

The capital city of Yerevan offers a huge variety of cafes, national fast-food chains and high scale restaurants where everyone can find something to his own taste and pocket.

Among the must-try dishes can be listed tolma with grape leaves, khorovats (barbecue), basturma and sujukh (jerked beef with spices), harisa (wheat cereals cooked with chicken), ishkhan fish (royal trout) and much more.

All of the mentioned is double tasty when paired with delicious Armenian wine, fruits, and vegetables that absorbed all the warmth of the sun. One of the most popular and beloved venues in the capital that serve authentic local food is “Karas” national fast-food chain, “Tumanyan” shaurma chain, ‘Yerevan” and “Caucasus” taverns, “Lavash” and “Sherep” restaurants. Tbilisi is a modern yet ancient city. Here along with modernist architecture, one can easily encounter old-styled buildings and houses. Unlike most European capitals Tbilisi is abundant with parks, squares, and recreational areas.

If you are tired of bustling city rush come to one of the city parks and relax in the shades of trees. The most popular one is the Rike Park due to its modernist architectural style. The prominent pedestrian Bridge of Peace built of glass and steel leads right to the Rike Park.

Another must-visit park in Tbilisi Botanical Garden (entrance fee is 2 GEL / 1 EUR). The Botanical Garden homes more than 3500 species of rare and unique plants. This huge area is a garden of inexpressible beauty with picturesque waterfalls and fountains.

Yerevan attracts tourists not only with rich architecture, museums, and entertainments but also with parks and green areas. One of the most beloved parks here is Victory Park. Situated on a hill, it offers breathtaking views of Yerevan at a bird’s glance. Here can be found the huge and impressive statue of Mother Armenia.

Another popular park is the one leading to the Cascade – “a stairway to heaven” – climbing up to the top you will be impressed by the spectacular views with each step.

The park is known for its landscaped gardens, fountains, modern sculptures, and the Gafesjian modern art gallery. And the last one on our list is the Lovers’ Park which is the most luscious and green in the city. High trees, green grass, waterfalls, and ponds make it a real fairy tale like the place.

Check this list of 10 places to visit in Georgia in 10 days!

Georgia is a country with a rich and enthralling history. This is easily witnessed by the abundance of historical monuments that can be found in every corner of the country. The capital of Georgia Tbilisi is no exception. Visiting museums and ancient medieval churches you can get aquatinted with the history, traditions, and culture of Georgia. Nearly all the state museums in Tbilisi are united in the main chain called Georgian National Museum.

The History Museum of Georgia after Simon Janashia is situated in the heart of the capital, on 3, Rustaveli Avenue. It houses different expositions and exhibitions of archaeological findings dating from Paleolithic to the Middle Ages.

Another exciting museum to visit is the National Gallery (address: Rustaveli Avenue, 11) mostly known as the “Blue Gallery”. Here you can admire the works of prominent Georgian artists such as Niko Pirosmani, David Kakabadze, Lado Gudiashvili, and others.

Armenia has a rich thousand of years old history which is reflected in museums and cultural monuments. Yerevan, being already 2800 years old, is considered one of the world’s oldest continuously inhabited cities and is like an open-air museum.

The capital has numerous museums visiting which you can get to know its rich culture. One of the must-visit museums is Matenadaran- the sanctuary and depository of ancient Armenian manuscripts.

On the Republic Square, just in the city heart, is situated the National History Museum with more than 400.000 pieces of rare exhibits that reflect the extremely impressive history of the Armenian nation from the times of its formation.

Visiting “Erebuni” Historical and Archaeological Museum you will plunge into ancient times and will discover a lot of facts about the origins of Yerevan. Georgia is listed among the first countries that adopted Christianity as the state religion. In fact, the country’s culture and history are closely linked with Christianity. Since the adoption of Christianity, many shrines and churches have been constructed throughout the country.

For those visiting Tbilisi, and history lovers, visiting one of the many old churches is mandatory, the oldest and most prominent of which is considered the Anchiskhati Cathedral, that was built in the 6th century.

Anchiskhati Cathedral is situated in the Old Town, in Upper Kala district. Visiting the church on Sundays you can also witness the divine performance of Anchiskhati Choir- the leader in Georgian polyphonic choral music.

The most modern yet majestic church is the Holy Trinity Cathedral Church, more known as Tsminda Sameba. It is the main cathedral of the Georgian Orthodox Church and is located on the hill of St. Ilya. Tsminda Sameba is considered to become the symbol of reviving Georgia.

Being the first Christian state in the world the religion is closely linked with the national culture. That is why Armenia is abundant with ancient churches and monasteries. The Cathedral of Saint Gregory the Illuminator is the most remarkable and impressive one among the churches in Yerevan. Built from white basalt it reminds of a huge angel guarding the city. The construction of the church was dedicated to the 1700th anniversary of the Christianity adoption in Armenia. Dive into the nightlife

Holidays without hanging out with friends in nightclubs and pubs are no fun! Tbilisi offers various options to reveal its completely new nightlife colors and flavors. Akhvlediani Street is considered the pulse of nightlife. Along both sides of this street are the most popular clubs, pubs, and bars. In the nightlife boils throughout the city. The majority of bars and pubs are open until dawn. Among the most famous clubs can be mentioned Bassiani, KHIDI, Mtkvarze.

Besides pubs and nightclubs, in Tbilisi there is a huge amount of wineries located almost in every corner. This is no surprise as Georgia is considered to be the cradle of winemaking and here the wine traditions are honored at a high level. Wineries also work till late midnight and if you feel like tired of loud music you can always choose to relax over a good glass of wine and enjoy your evening.

Yerevan is beautiful, especially at night! With the dawn the city puts on bright colors, becoming vibrant and full of life. Both locals and tourists love to stay outdoors till late at night especially in the summertime. No surprise as Yerevan is considered one of the safest capitals. Numerous cafes, pubs, and wineries are open even after midnight. People just sit in outdoor cafes enjoying a glass of wine or refreshing cocktails. The beloved night time venue is the Republic Square with its singing and dancing fountains.

The lovers of discos and night hangouts can enjoy dancing in numerous clubs and pubs situated within the city center. The most favorite ones are Paparazzi Club, Kami Music Club, El Sky Bar, Mezzo Classic House Club. Quality music, unlimited alcohol, and nightlife emotions will make your time unforgettable.