I must admit that I didn’t know much about the Scottish capital before I got there. The trip came kind of spontaneously so I didn’t even have much time to prepare myself, unfairly Scotland is often overshadowed by the brightness of its neighbor England, and many people choose to go to the second leaving Scotland to the corner, a huge mistake.

Edinburgh is the capital, a large city with small-town vibes very welcoming and easy to get around, the whole atmosphere makes you go back a few centuries. If you have time, it is also worth to visit Scotland’s second largest city, Glasgow, the economic capital.

Going to Scotland, our plan, at first was to get to know the capital and take the opportunity to visit the famous Scottish Highlands, which served as a battlefield numerous times between the peoples of the south and the north and sometimes, between the Scots and the English, a pass that undoubtedly is worth. There are several companies that make this tour, and the tours vary from one day to one month.

If you are spending just one day in Edinburgh, I recommend checking this itinerary to help plan your day.

For those planning a road trip across the UK, here are some tips by Lauren and Jarrad from Luxury Travel Hacks. If you are traveling through Scotland only, don~t worry, here goes a 10 days road trip itinerary.

What to do in Edinburgh

Although it’s a capital, Edinburgh is not as big as Paris and London for example, the historic side of the city is away from the new part of the city and the touristic points are basically all divided in two avenues, the Royal Mile and Prince’s Street.

The first one links the oldest touristic points, goes from the Edinburgh Castle to the Palace of Holyrood and Arthur’s Seat. The second is a shopping avenue, full of stores like H&M, Forever21and the dear of the foreigners without money: Primark.

Edinburgh has 4 high spots where you can have a more peripheral view of the city. One of them is the Edinburgh Castle terrace, at the end of the Royal Mile, another spot is the Calton Hill where you can find some of the famous monuments, including Nelson Monument, a small tower that you can climb to have a 360º view of Edinburgh, the price for climbing the tower is £5.

Close to the Calton Hill, you find Arthur’s Seat, the highest hill of the city, or if you prefer something more central, you can try climbing the Scott Monument in the Prince’s Street close to the central station, the price to climb its 287 step is £4. 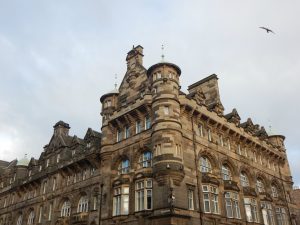 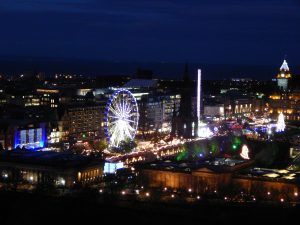 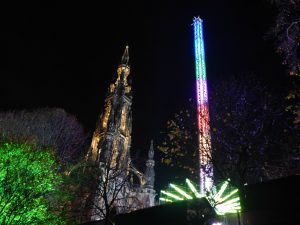 I won’t lie, it’s not a city you have the necessity to spend more than 3 days in it. But it is a beautiful city. The good thing is that Edinburgh seems to be out of tourist’s route still, so it is not so crowded, full of people everywhere in the best “Oxford Street on Black Fridays” style like many capitals.

Besides, it is so easy to move around in the city that in the second day you already feel like home. I’m an annoying kind of person, it takes me around 3 days to get used to the city until there I get distrustful about everything.

The architecture of the city is also very interesting, the great part of the buildings are made of grayish stones, many have towers like castles. Through the streets, you can find small alleys very dark giving way to other streets, worth an investigative movie. Then you stop and think about all the stories that could have come out of each of those dark alleys. 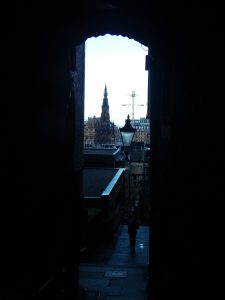 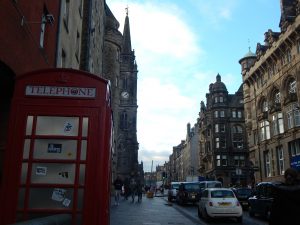 Through the Royal Mile, you can find lots of shops selling souvenirs, men’s skirts (kilt) are everywhere, and if you are into this kind of stuff, they come in many different colors, to fulfill any taste. Following the scotch tradition, every man earns a kilt when he reaches the age of 18. The color of the kilt varies accordingly to the family.

For those who like Whisky, and are after a good gift for their papa, as it was my case, you feel kind of lost in with all those options! And you are thinking about buying one, my tip is, please get one that you won’t find back home. I mean, what’s the point in making all your way to Scotland just to buy something you would find right in the corner.

In Scotland you can’t miss the unique opportunity of trying the typical dish, called Haggis, it’s basically sheep’s stomach stuffed with sheep’s pluck (what an opportunity!), the idea sounds nasty in the beginning, but you know what? It’s not that bad! I bought 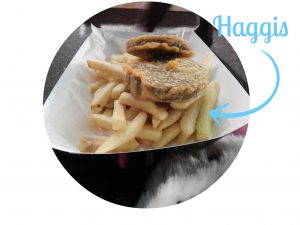 mine in a fair in Prince’s Street Garden. It’s a heavy dish very spicy, good for the winter.

Now, in case you are going to Edinburgh interests in the liquids, nothing stops you from taking The Scotch Whisky Experience. Tours vary from £15 to £36, there you learn about the science behind the Whisky, get to know some behavior and curiosities related to the drink and in the end, you will be presented with some Whiskies from different parts of Scotland for tasting.

How to get there

Edinburgh has its own international airport, it’s possible to get there directly. In case you are in Europe already, you can try one of the low-cost companies operating in the area, like Ryanair.  Going from London, the flight leaves the Stansted airport in London and takes around one hour and a half until Edinburgh

There is also the possibility of going by train. In London, all trains with destination Edinburgh, leave from the King’s Cross station or Euston station. There are two companies operating on this route, Virgin Trains East Coast (the one I picked) and Cross Country. It takes around 4 hours and 20 minutes to get to Edinburgh

In Edinburgh, all trains arrive at the Waverley Staton that is the central station of the city. Some trains, those whose destination is the city of Aberdeen, in the north of Scotland, also make a stop at the Haymarket Station, but it is always good to check, in doubt the best to do is to get out in the Waverley Station, as the distance between these two stations is something around 15 minutes by walk.

If you live in Europe or has a European credit card, you can buy your tickets directly from the official site of these companies, but if it is not your case, you will only be able to buy the tickets from “outsourced” sites, I bought mine from Rail Europe, the price of the ticket is a little bit higher than on the official one, but nothing exorbitant.

The trave is a little bit tiring but it worths it. In the way between New Castle and Edinburgh, you can have a glimpse of the North Sea. 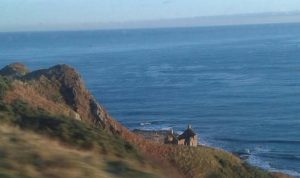 After buying your tickets you can print them directly from machines you find in the stations, normally your ticket will be available 2 hours after the purchase, you will receive a serial number by email and that’s the number you will use on the machines.

If you have some difficulties or distrust technology (like me, and yeah I’m a 90’s kid) you can take the line where you normally buy tickets and ask the person working there to print your ticket. I printed mine in the St Pancras Station (in the back side of the station there is a cliche) besides the King’s Cross Station. 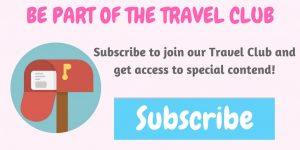 Written By
Isadora
More from Isadora
Pin2CompartilharTwittarCompartilharCompartilhar2 Compart.There are many logistical issues that you need to go over...
Read More